The 90’s were a glorious era for PC gaming. The rapid adoption of the internet by consumers led to online multiplayer becoming a norm for games. Increased processing power let game developers further realize their ideas, from both an artistic and narrative standpoint. But most of all, it was also a time of breakfast cereal tie-ins.

Chex Quest not only managed to revive a fading brand, but also captured the hearts and minds of millions of budding gamers.

Set on the planet of Bazoik, you take control of the Chex Warrior, as you fight to eradicate the tyrannical Flemoids, who are keen on invading your planet. But lo and behold, you do not simply kill these creatures. No, for there are some things worse than death. Instead, with “zorcher” in hand, you teleport these creatures, nay, monsters, into oblivion.

Developed by a small team of former modders, the game is a total-conversion of the first five levels of Ultimate DOOM, the special-edition of the DOOM game. Released in 5.7 million boxes of Chex-brand cereals, the game was promoted using television commercials, magazine advertisements, and a Chex Quest website. There was even a dedicated helpline set up that one could call for Chex Quest related issues. The promotion, lasting only six weeks, propelled a 295% volume share increase for the cereal over the previous year. 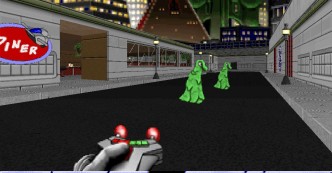 Since it’s release, Chex Quest has been an enduring gaming mainstay. Chex Quest 2 was officially released by Chex in 1997, a year after the original. In 2008, former members of the development team got together and released Chex Quest 3 as a fan service. Even in the years since the initial release, there have been numerous mods and levels released by the dedicated fan base that keep people’s interest in the game piqued.

So what are you waiting for? Go download Chex Quest, a game whose sales surpassed The Legend of Zelda: A Link to the Past. Participate in the forums, and learn all you can from this unique gaming community. Get some mods to extend its shelf life. But most of all, enjoy what surely is a fond memory of 90’s gamers everywhere.