If you attended a Canadian public school in the 1990’s, there’s a good chance you were exposed to the masterpiece that was Cross Country Canada. If you lived elsewhere, well, you’ll probably think that I’m stark raving mad.

Either way, read on and re-live the nostalgia/become educated about the greatest edutainment game of them all. 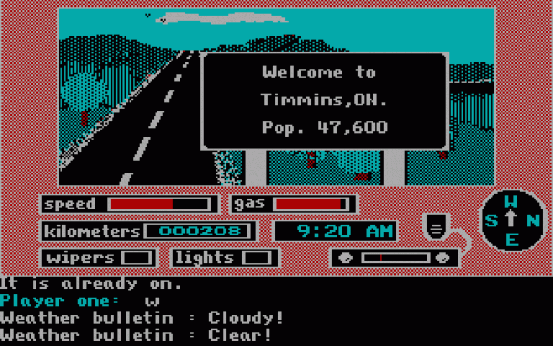 Released in 1991, Cross Country Canada was an edutainment program released by Ingenuity Works. The game was designed to educate children on the geography of Canada, whilst giving historical information on the various locations you visit. 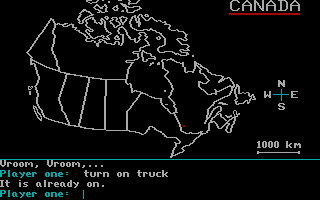 In the game, you play the role of a truck driver who is tasked with transporting goods across Canada. If you’re asked to pick up steel and deliver it to Saskatoon, Saskatchewan, you may first have to make a stop in at Thunder Bay, Ontario to pick it up. There are of course various “obstacles” that get in the way of your deliveries though. For one, you are on a schedule, and need to figure out the easiest way to transport goods across the country. This makes you reconsider driving from one end of the country to the other to pick up some fish, as opposed to picking up something more close by; possibly in the same Province. You must also eat, sleep, and fill your tank with gas on a routine basis. Failure to do any of these causes delays in your trip, which may make you fail a delivery.

Navigating around the world is done via simple text commands, such as “TURN ON MOTOR,” “GO TO GAS STATION,” “WEATHER,” etc. In this way, the game plays out much like a text adventure. Not having all the commands in the classroom, it was also quite fun to try and figure out what we could and could not do. Graphically, the game is limited to the 4-colour CGA palette, but the graphics still hold a charm all their own.

While the game itself was fun, there were a number of in-class “mini-games” that many of us came up with to spice things up. For instance, driving at night without issuing the “HEADLIGHTS” command would result in you eventually crashing. So hey, why not see how long we can go without crashing!? Or maybe we want to “SPEED” for as long as possible before a cop pulls us over, or we crash. Or perhaps you were more inclined to force your driver into sleep deprivation, in an effort to see how long you could go before passing out behind the wheel! Ahhh, to be a child again. 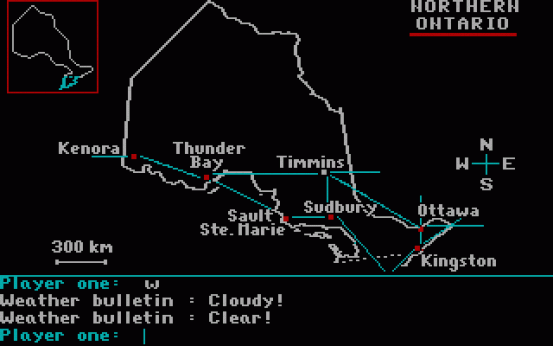 Overall the game is a fantastic piece of edutainment. Players learn geography, history, math, logic, and science skills all while trying to deliver their goods on time. There is also a two player mode where you can take turns driving your trucks, in an effort to see who can delivers things the quickest. So go on, load up DOSBox, and take a piece of Canadian videogame heritage for a spin. You won’t be disappointed.